Historically, this test only tracked memory use over time as its only purpose was detecting memory leaks. Recently, however, we also started looking at other statistics generated during this test.

While testing BIND 9.16.2 on his development machine (6 cores + HT), @mnowak noticed that the number of incoming queries received by the recursive server during the "stress" test was unexpectedly low. Flamethrower statistics were showing average response times in the range of hundreds of miliseconds for all combinations of layer 3 (IPv4, IPv6) and layer 4 (UDP, TCP) protocols.

I tried reproducing this phenomenon on my laptop (2 cores + HT) to no avail, so we initially assumed this was some local problem on @mnowak's machine.

Yet, @mnowak tested older versions: the problem persisted with BIND 9.16.11 but did not persist any more with BIND 9.16.0. So he did a git bisect between BIND 9.16.0 and BIND 9.16.1 and found out that the commit which causes BIND performance on his laptop to plummet was 16cedf6e ("Use pthread rwlocks by default"). So he retested BIND 9.16.2 using --disable-pthread-rwlock and the problem was no longer there.

I managed to reproduce this behavior on gitlab-ci-03.lab.isc.org (4 cores + HT). I did a few 5-minute "stress" tests (the problem seems to be triggered immediately, not after some time, so 5 minutes seem good enough for initial experiments) with:

The requested query rates for each L3/L4 protocol tuple were:

During the "stress" test, each Flamethrower instance logs the min/avg/max response times for the queries it sent within each one-second period. I plotted the average response times that Flamethrower logged in those lines for each test run. All plots have the same scale for easier comparison. Here are the results2: 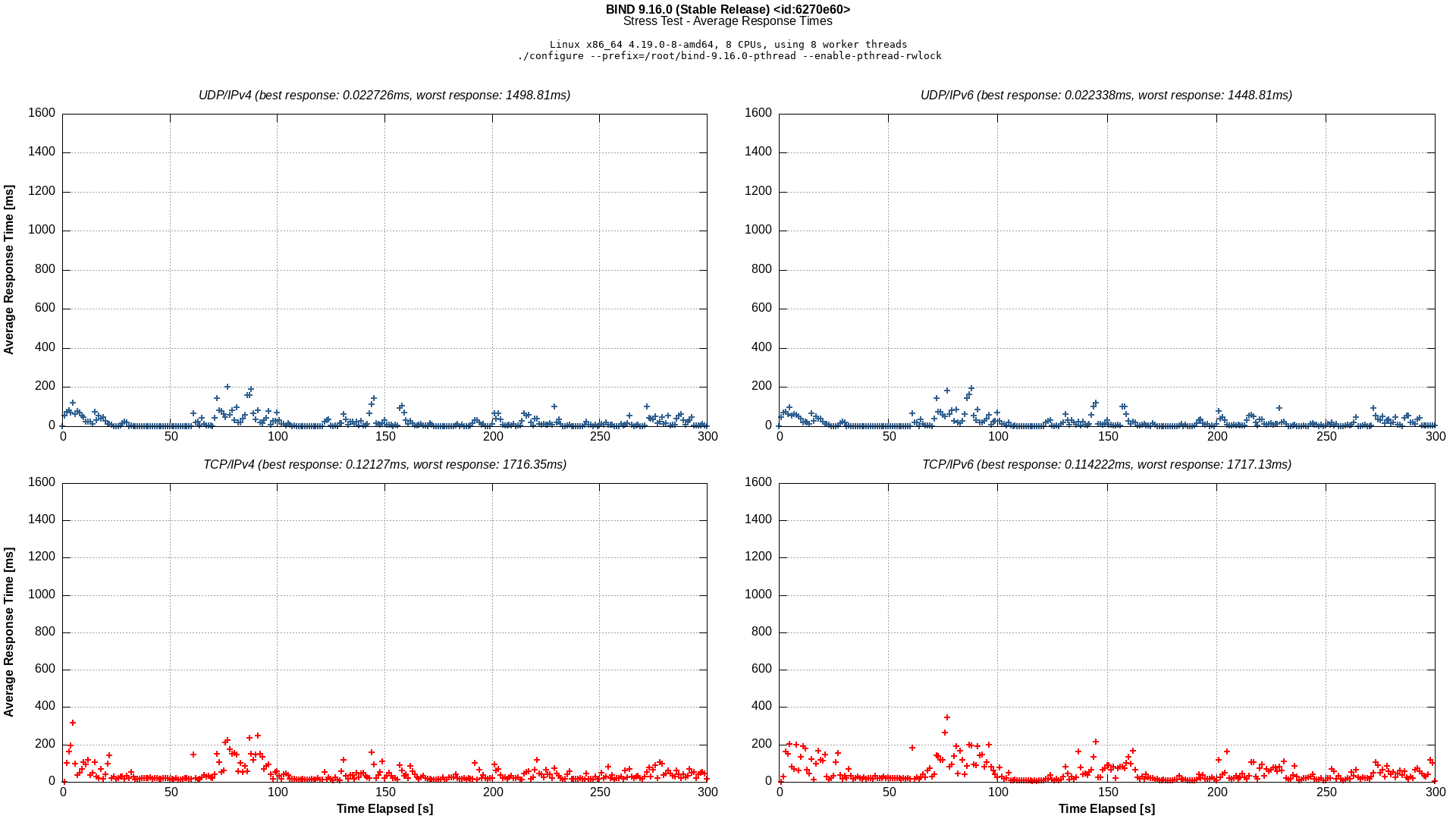 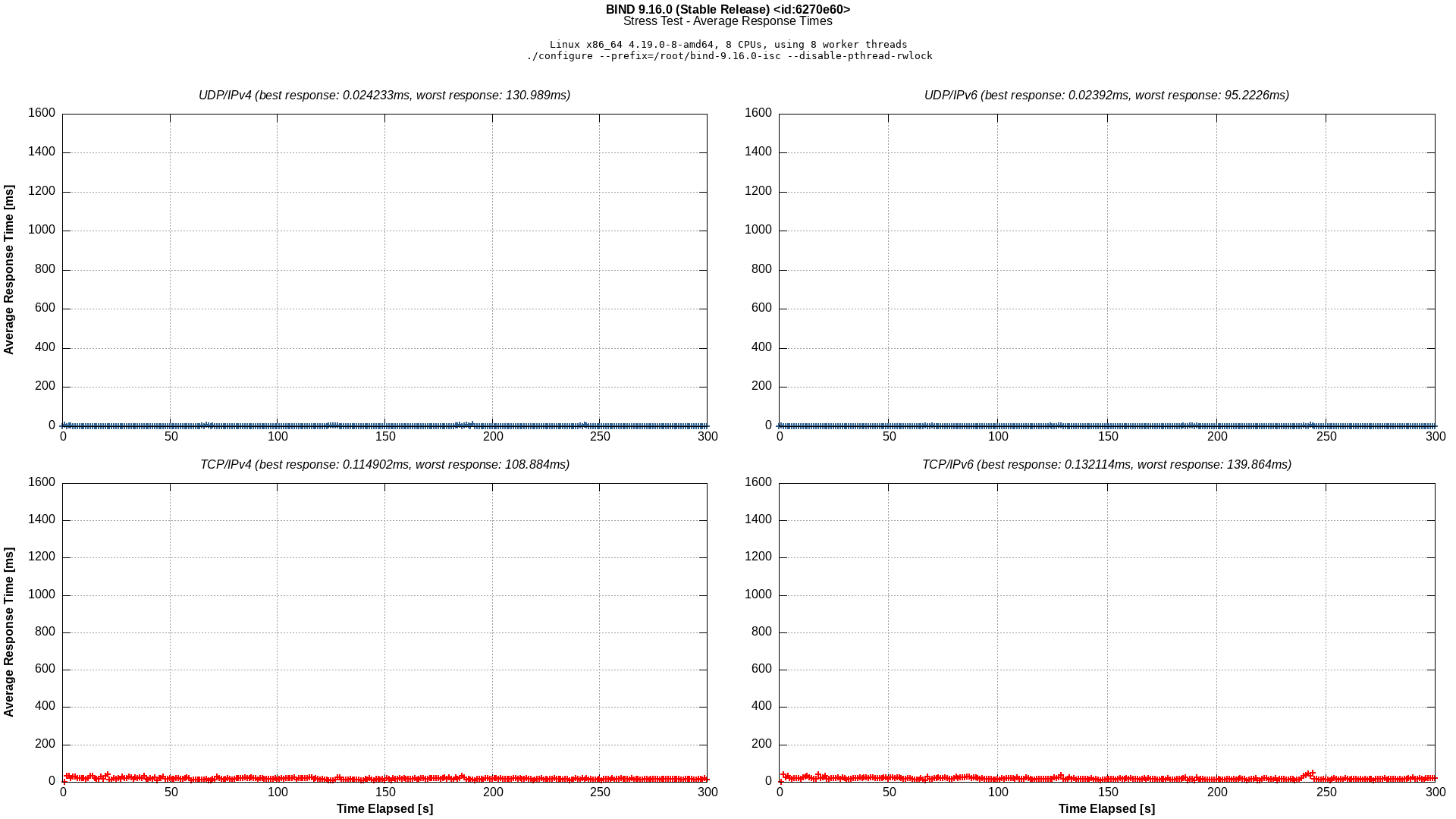 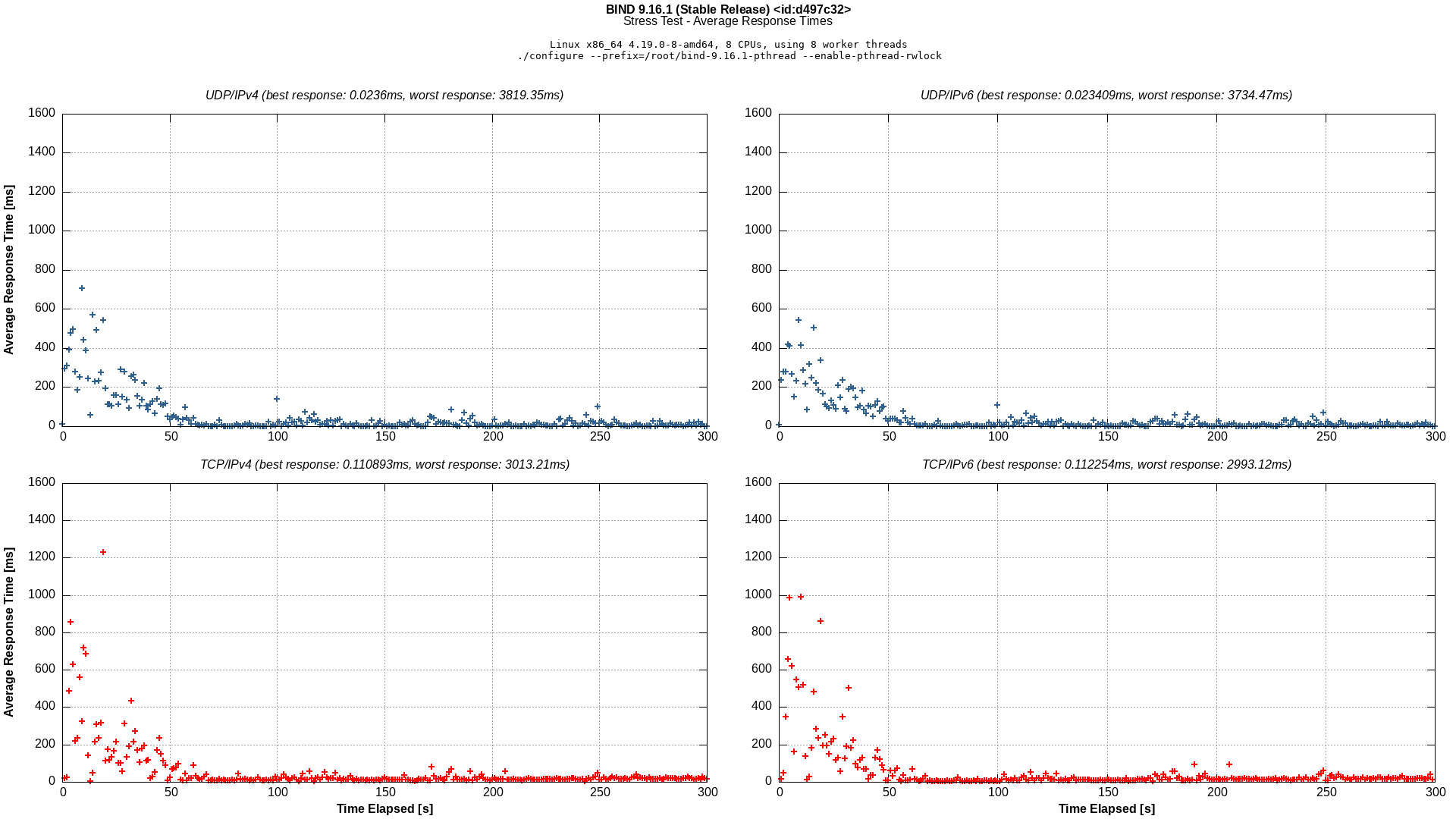 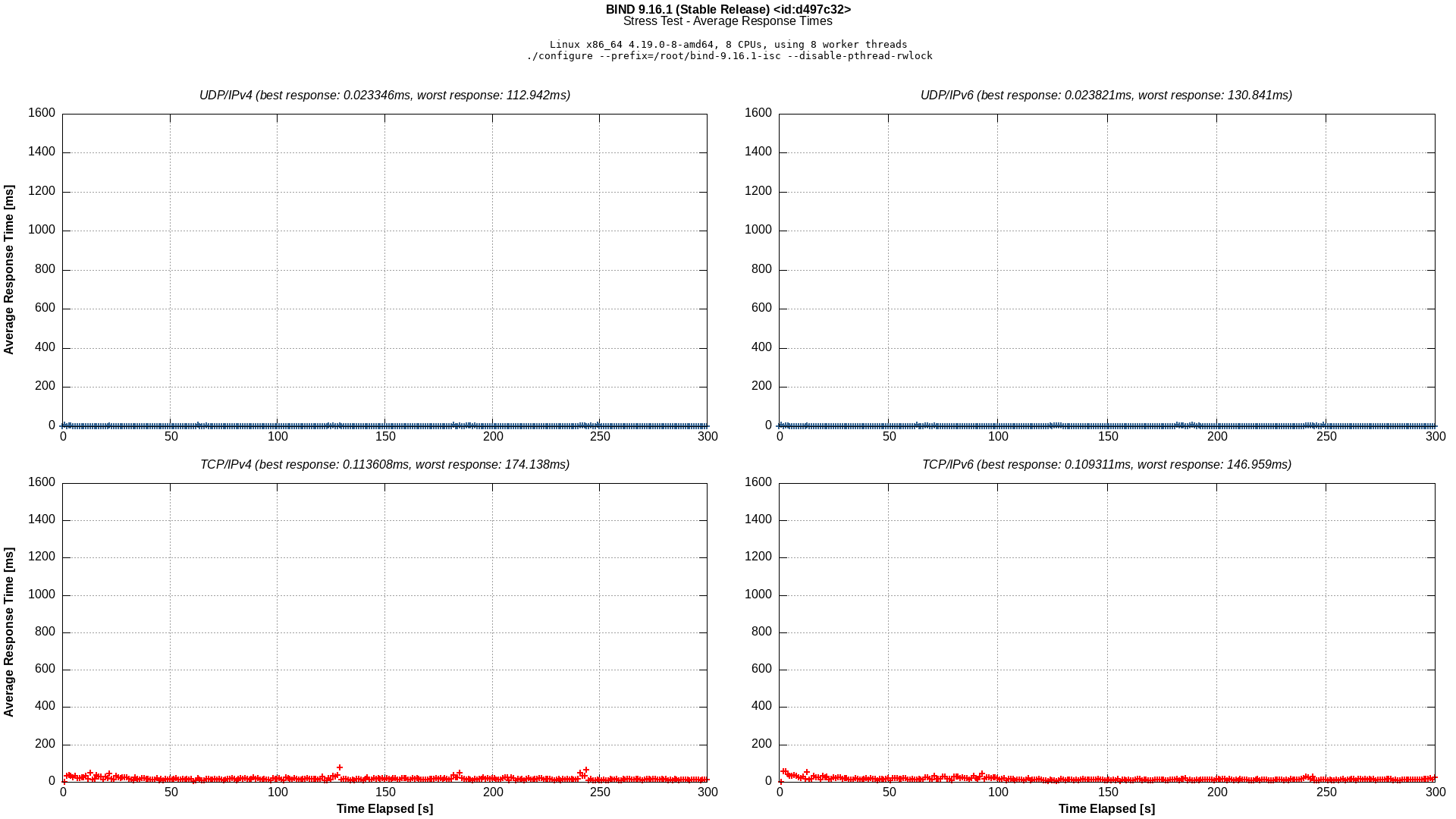 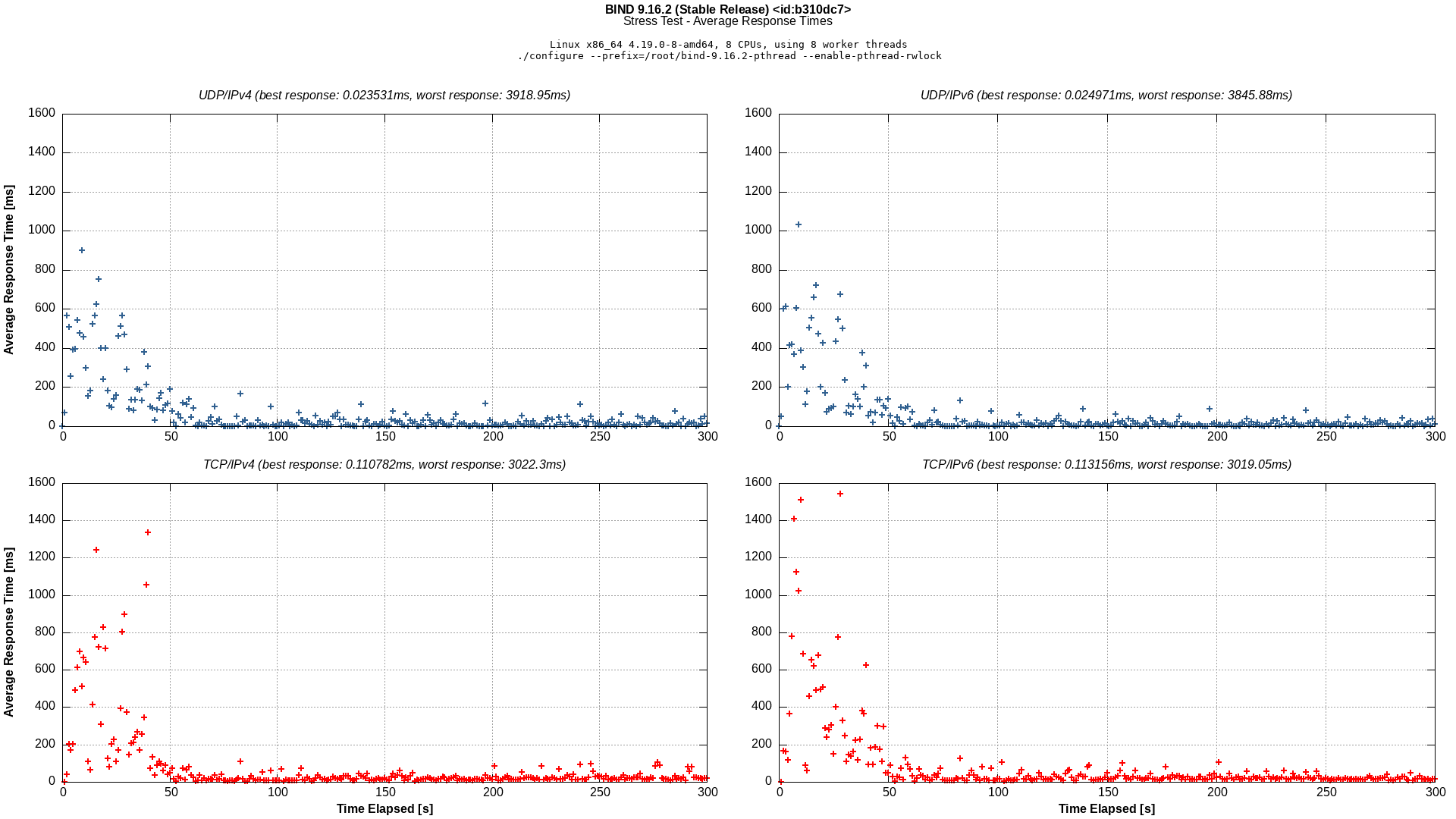 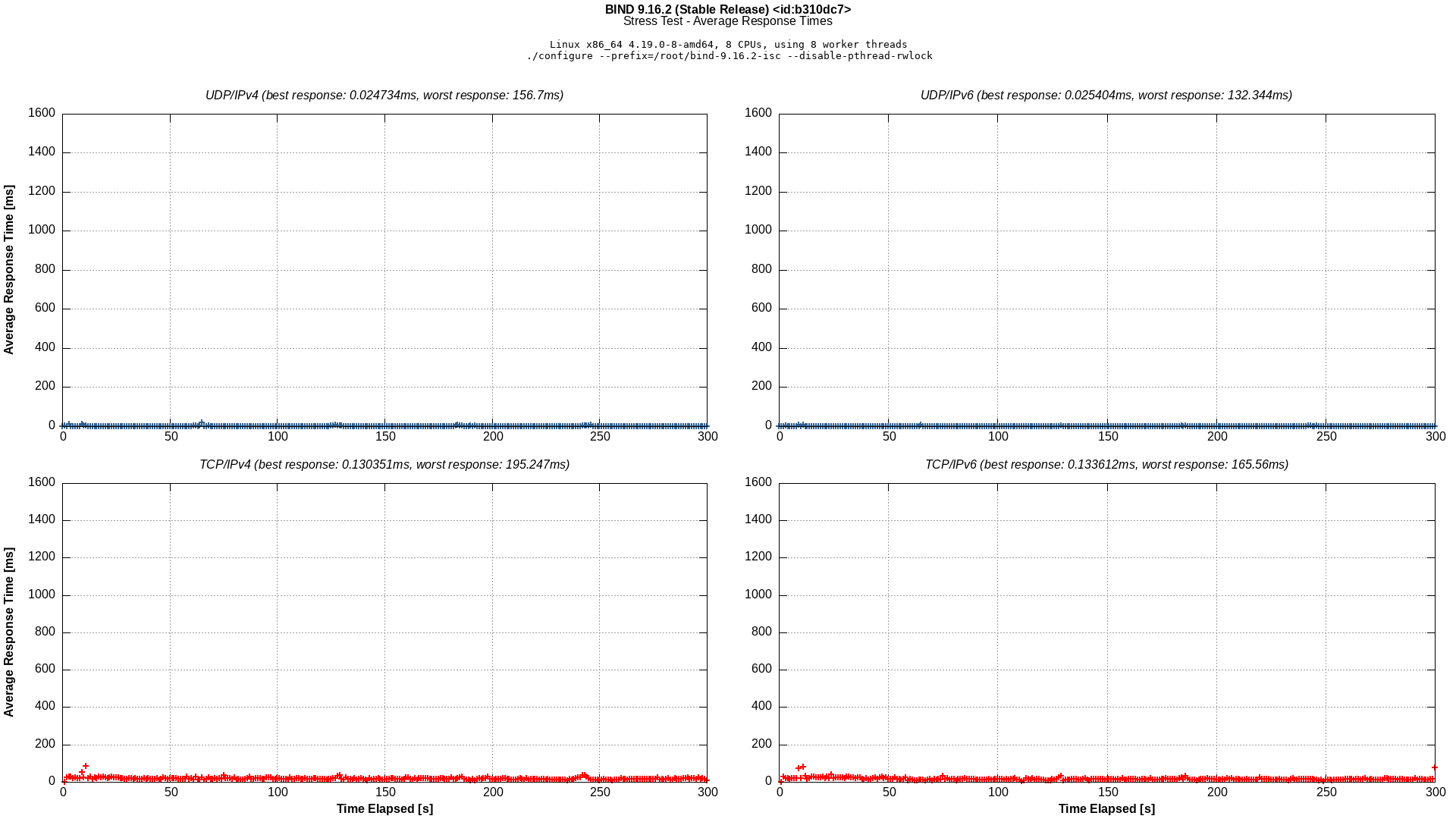 And here are the same plots cut off at 200ms on the Y axis: 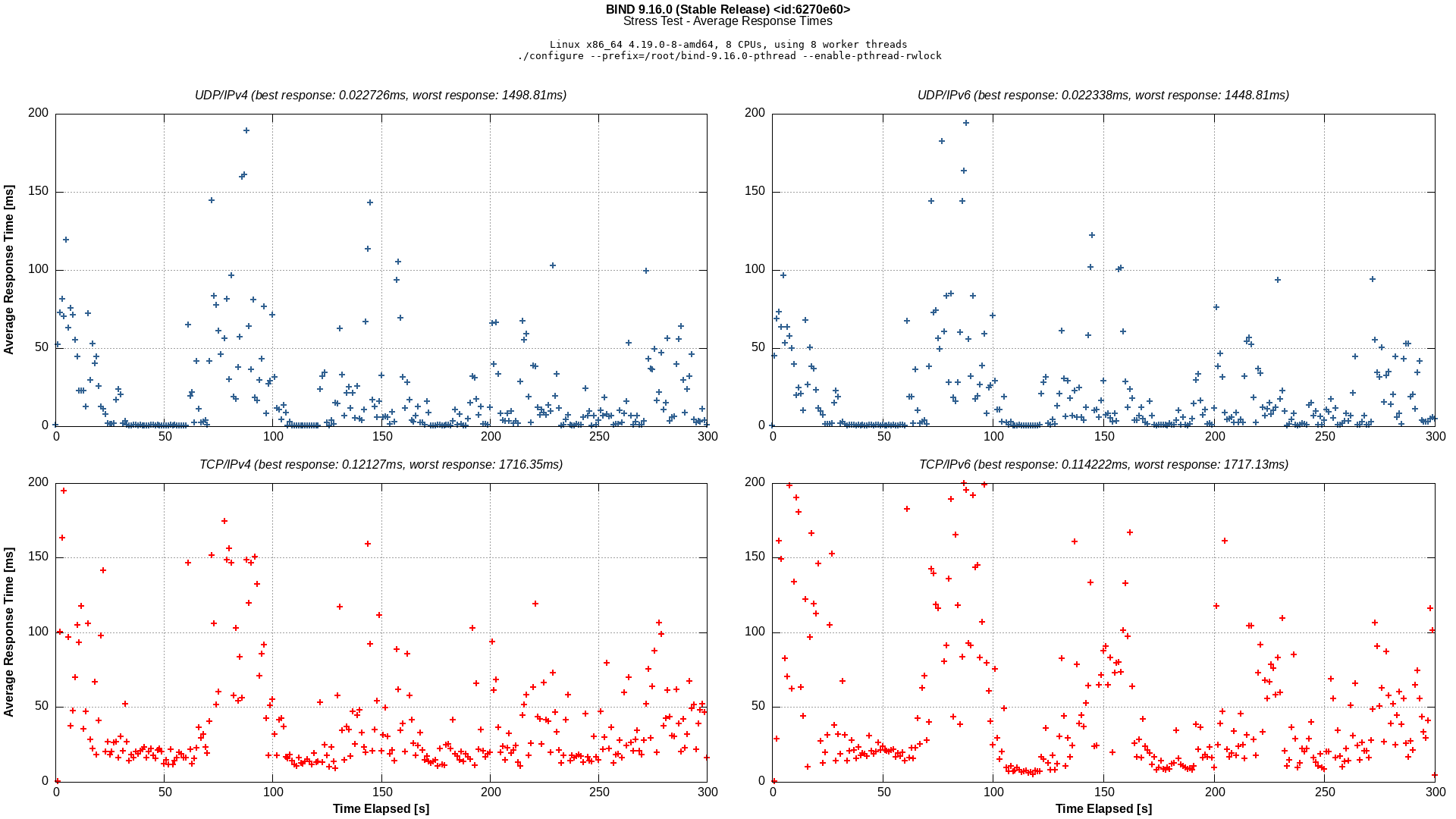 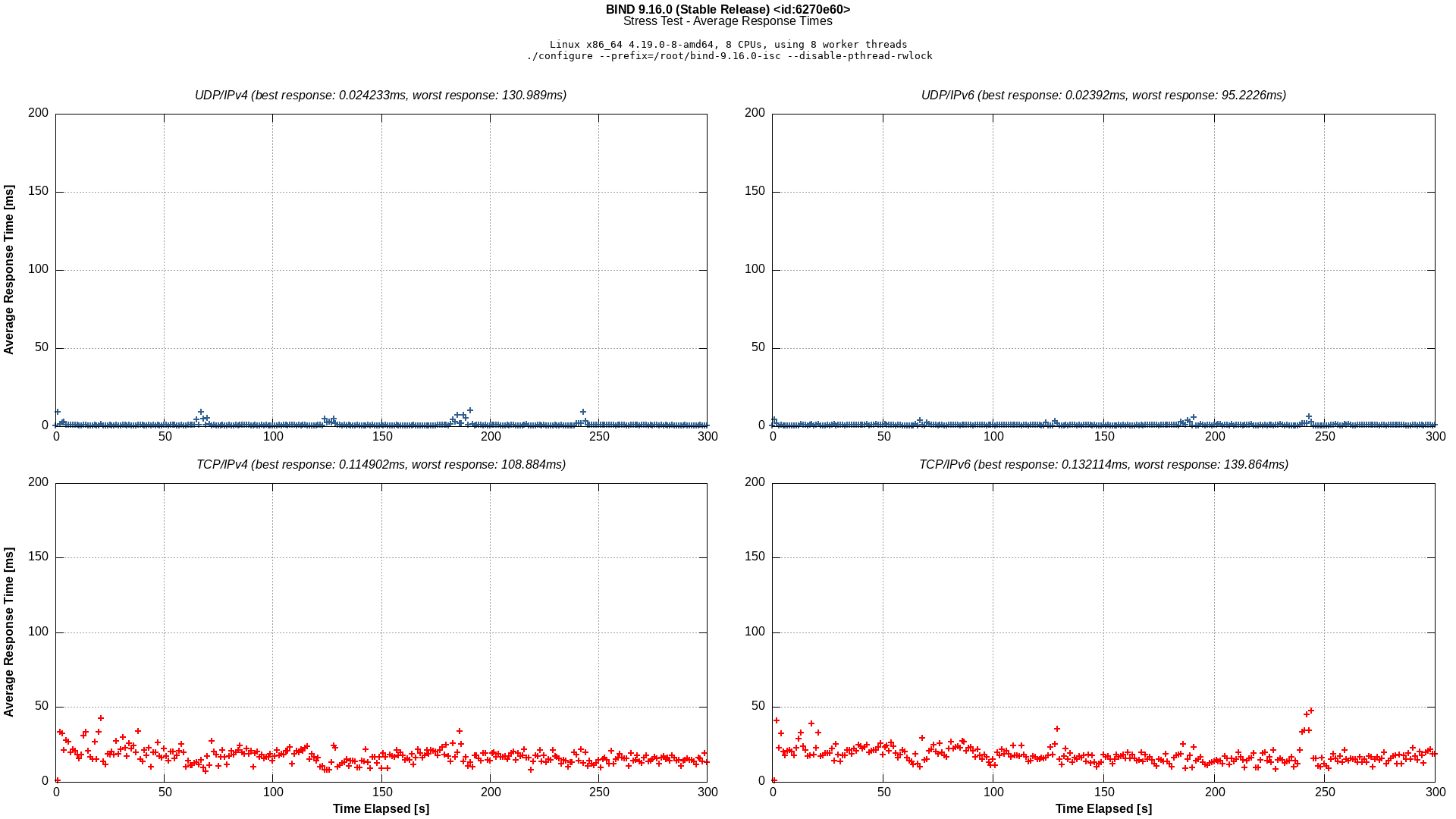 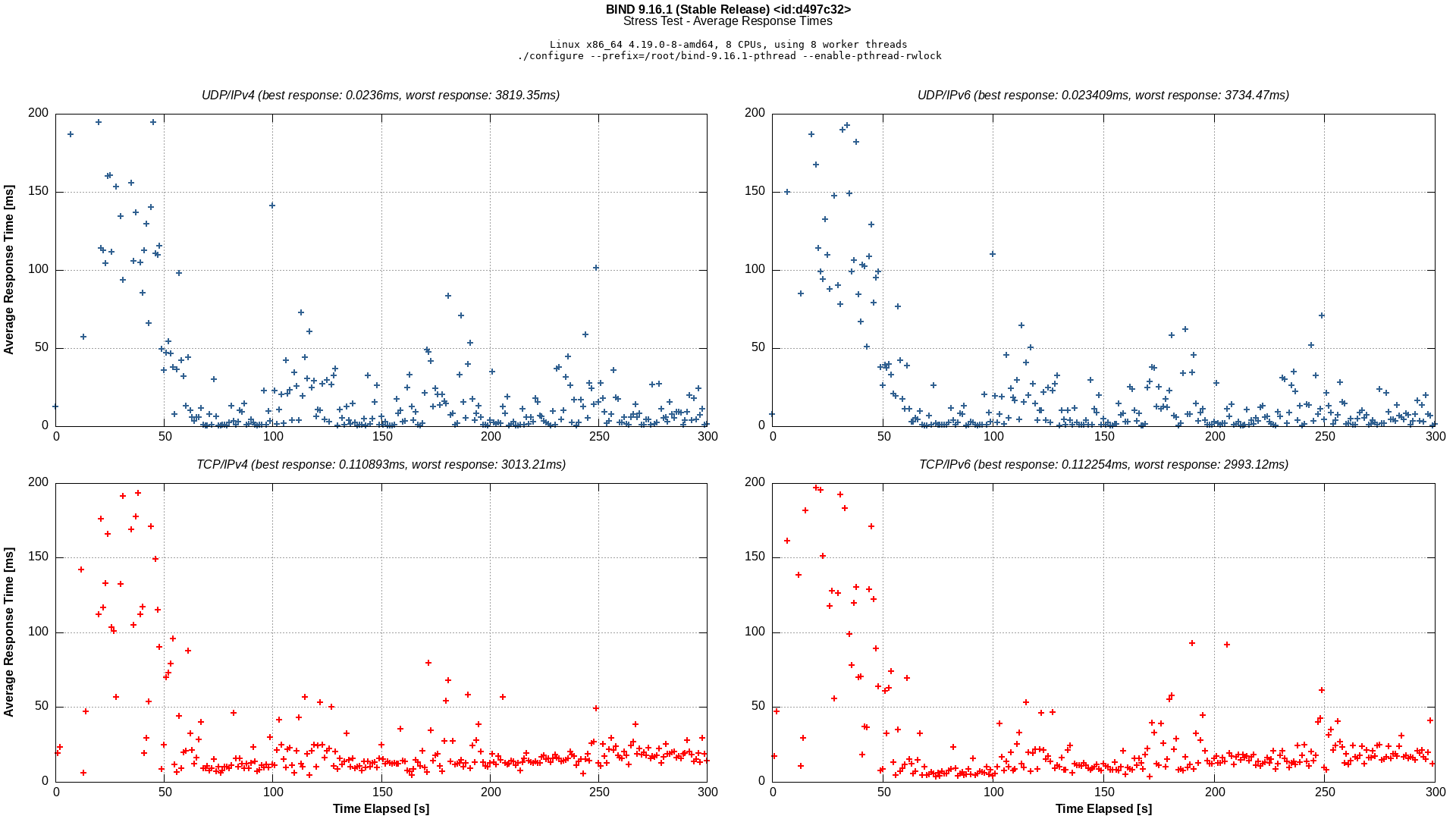 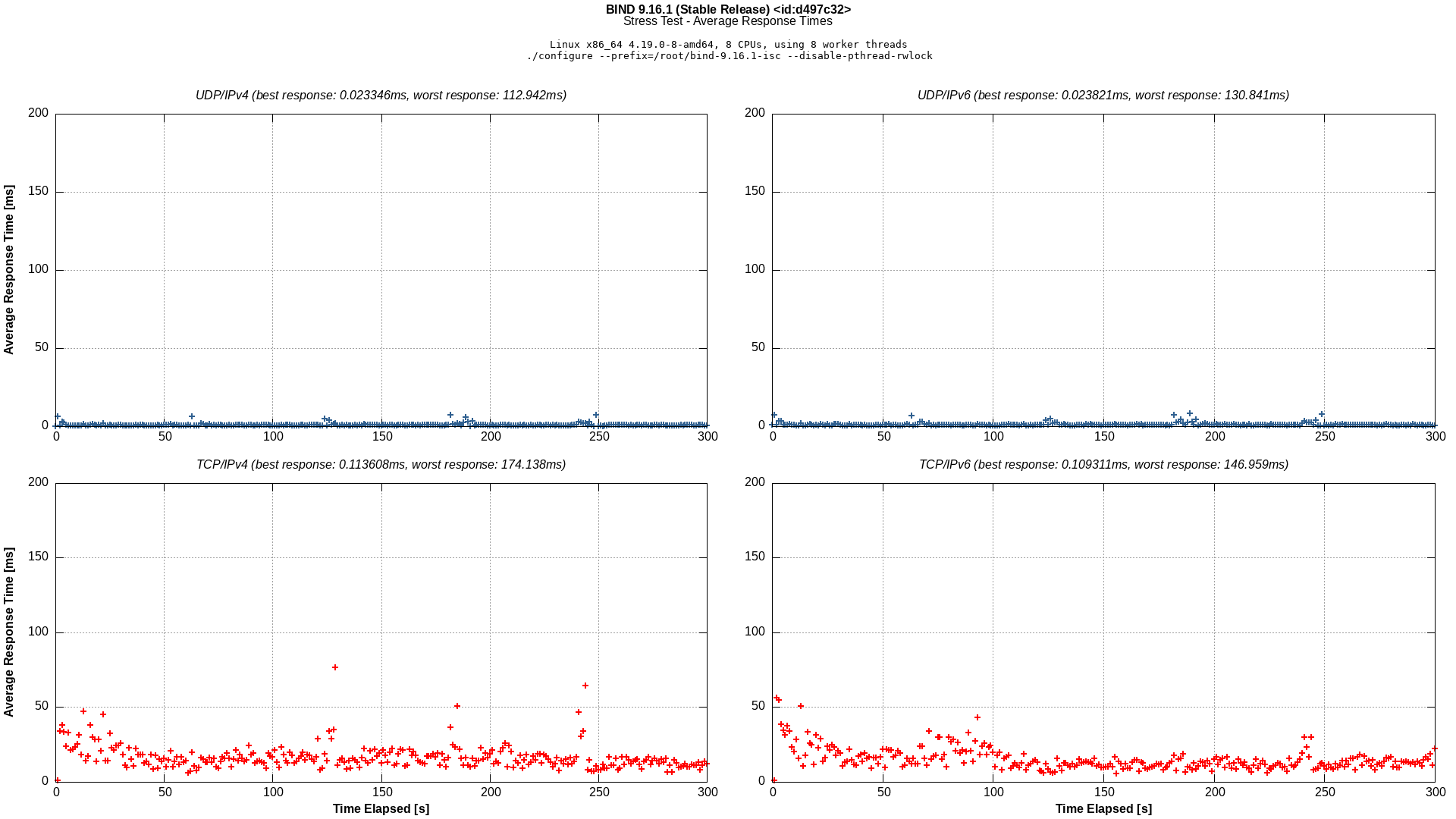 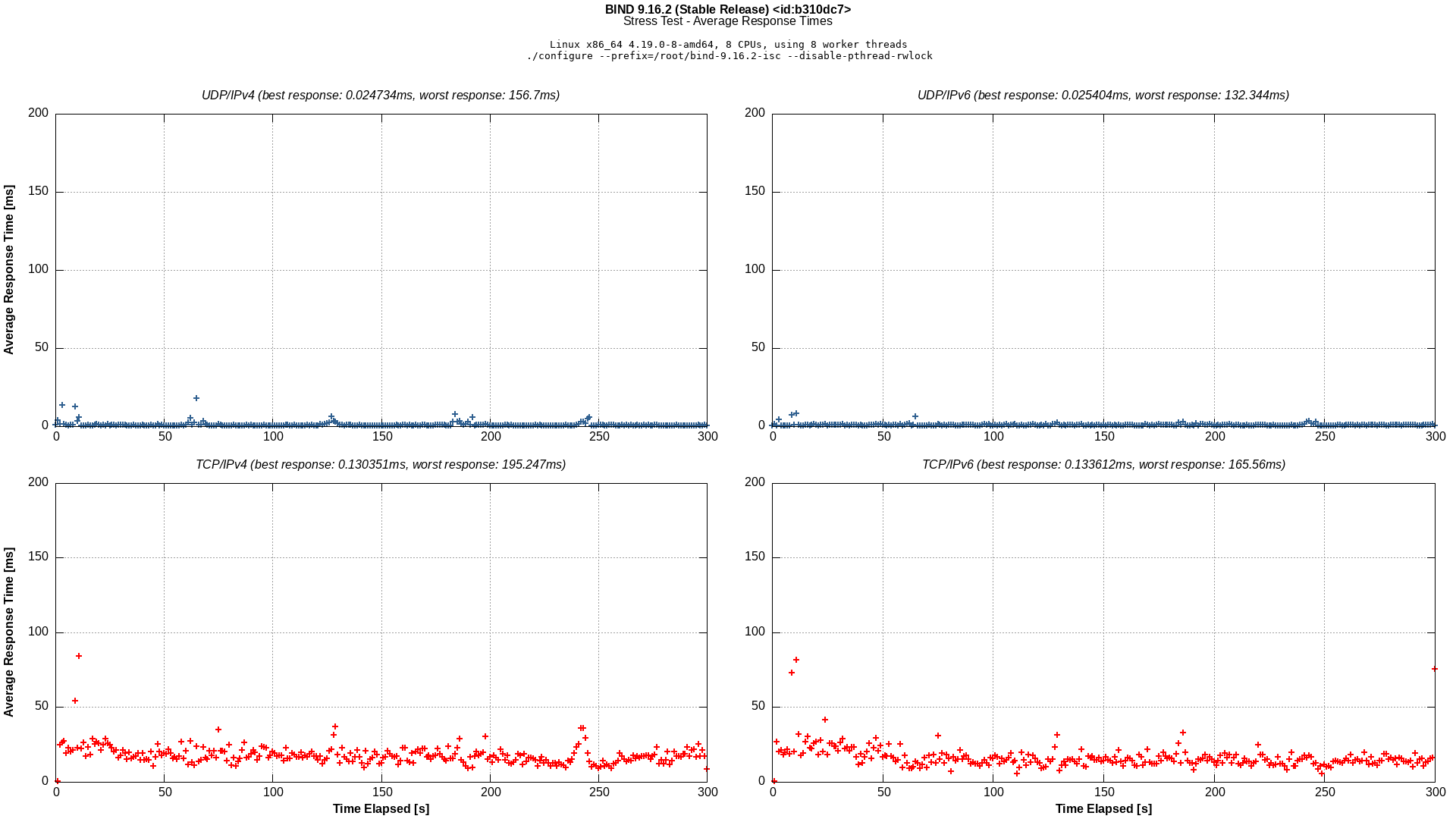 From these plots, it looks like the problem was still relatively benign in BIND 9.16.0 but got aggravated in BIND 9.16.1 and then became even worse in BIND 9.16.2.

During these tests, recursive named instances generated a lot more SERVFAIL responses for pthread builds than for ISC builds:

I checked Perflab data for the cold cache scenario and it seems a lot of SERVFAIL response are also generated there (though I admit I have not looked closely at how the Perflab cold cache test looks!). Here are some results from the last dnsgen runs for a few Perflab tests:

Given that Perflab tests run on multiple physical machines while all processes in the "stress" test are confined to a single host, this seems to look like something more than just a testing glitch and I believe it should be investigated further.

I may have been looking at this for too long, so feel free to point out any mistakes in my reasoning and/or testing methodology.