This document describes a design for the Lease File Cleanup in Kea (abbreviated "LFC"). It is an accompanying document for the [wiki:LeaseFileCompressionRequirements LFC Requirements]. Please refer to the "requirements" document for the problem statement why the LFC feature is important in Kea.

There was a discussion on the kea-dev mailing list in November 2014 about the possible approaches to implement the LFC. This discussion was initiated by Nicolas Chaigneau (Thanks!) and is available [https://lists.isc.org/pipermail/kea-dev/2014-November/000185.html here].

As a result, ISC has created the [wiki:LeaseFileCompressionRequirements LFC Requirements] document and asked for feedback on the list. The document has been updated according to the feedback obtained. Please refer to this [https://lists.isc.org/pipermail/kea-dev/2014-December/000211.html thread] for details.

The most recent updates to this document are a result of reviews by Stephen Morris and Tomek Mrugalski, as well as a result of the discussions over the phone between Marcin and Shawn. The reviews can be found in the kea-dev mailing list archives:

One of the key [wiki:LeaseFileCompressionRequirements requirements] for the LFC is the ability to recover from an unexpected interruption. Therefore, the lease information must be preserved until the LFC is completed successfully. If it is discovered, during the subsequently executed LFC, that the previous LFC was unsuccessful (e.g. as a result of a server crash or machine reboot) it restarts the cleanup process and discards (possibly incomplete) files created during the unsuccessful run. Using this approach the server preserves the integrity of the lease information. As a consequence, lease information is spread across multiple files.

This section defines naming conventions for all lease files required by the LFC.

Note: the name of the file used by the DHCP server to record current updates to leases (shortly ''Lease File'') is specified by the server administrator in the server configuration file. All other file names used by LFC are based on this name, i.e. are generated by appending a specific suffix to this name. For example, if the Lease File is "kea-leases.csv", the name of the LFC Output File will be "kea-leases.csv.output.

By checking the presence/absence of the specific files, the ''kea-lfc'' application and the DHCP server may determine the state of the previously executed LFC when it terminated (including crashes).

The ''kea-lfc'' is a standalone application in the Kea code tree which exposes the following command line options:

The usually contains the path to the current Lease File and this information could be used by the ''kea-lfc'' to generate names for other files. This would eliminate the need for additional parameters. However, as a result of the discussions about the design it has been decided that the command line parameters will be implemented as it gives more flexibility. For example: it is considered to be easier to test the application without the need to generate the Kea configuration file. It is also easier for the administrator run LFC manually by just specifying the location of the files.

The design discussions considered two approaches for the ''kea-lfc'' to perform the lease file cleanup. The first approach assumed that the program walks through the lease entries in the input file and rewrites those entries to the output file, for which expiration time was not reached (when comparing with a current system time). This approach wouldn't require loading all leases to memory before writing them to the output file. It would also allow for preserving "unparsable" information found in the processed file by rewriting this information to the output file as is. The second approach considered was that ''kea-lfc'' first loads all lease entries into memory and for each client replaces previous entries for the lease with later entries. When all leases are loaded into memory, the program dumps them into the output file. The down side of this approach is that it consumes memory for holding all lease information during LFC. It also makes it troublesome to preserve "unparsable" data found in the input file, because by loading all leases from the file into memory, the location of the unparsable data in the input file is lost. The benefit of using the latter approach is that it guarantees that exactly one (the most recent) lease entry is held for each client in the output file, which may significantly reduce the lease file size and makes the LFC process more effective. Therefore, this approach has been chosen.

The ''kea-lfc'' should be written in C++ and should make use of (link with) the Kea libraries to manage the lease files in the CSV format. The state diagram of the ''kea-lfc'' application is depicted on the picture in the next section.

This section presents the state diagram for the ''kea-lfc'' program performing cleanup of the Previous Lease File and the Lease File Copy. 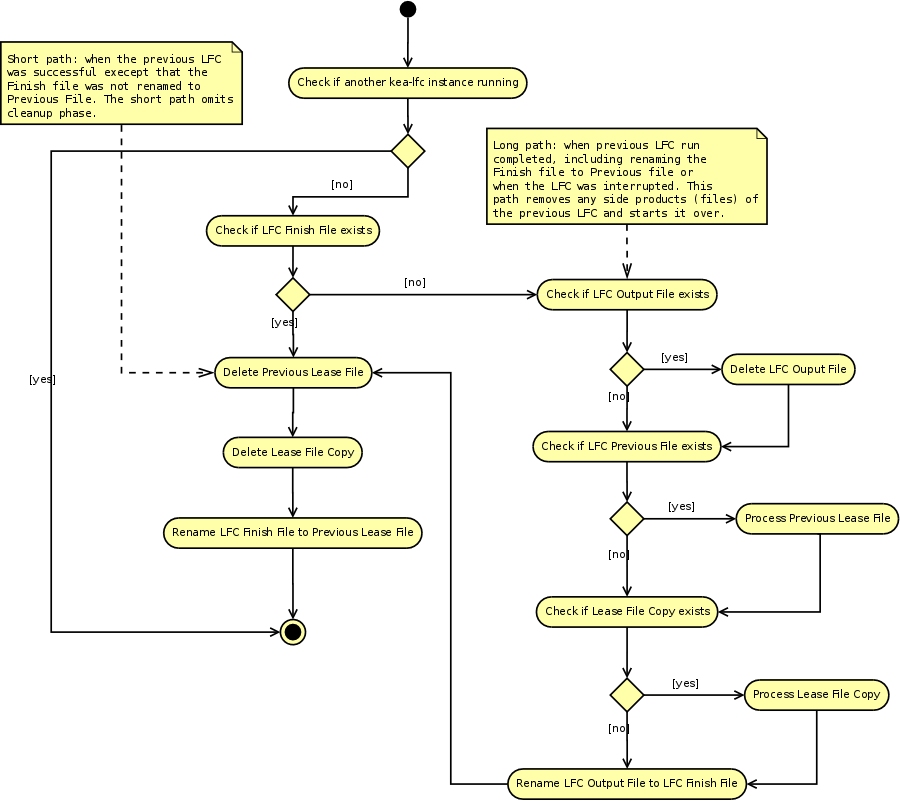 The corresponding (simplified pseudo code) for this state diagram is shown below:

The LFC is started periodically and it can be triggered by the timer expiration or any other trigger that may be implemented in the future, e.g. triggered manually by the server administrator using the Kea command control mechanism (TBI). Typically, the duration of the LFC is much shorter than the period between the startup of two subsequent LFCs. However, the duration of the LFC depends on different factors, e.g. hard drive speed, lease file size, number of expired leases in the lease file, frequency of the renewals etc. In addition, the period between LFC startups is controlled by the administrator depending on his needs. Therefore, it is possible that the LFC may be triggered while a previously started LFC is still in progress. It is possible to implement restrictions on the Kea configuration mechanism to prevent configuration of a "too short" period between LFC startups, but that doesn't address the case when two overlapping LFCs are started using the manual methods.

The last two approaches seem to be the most feasible. Ultimately, we should support the third approach, as it avoids manual intervention by the administrator. However, as a first step, the fourth approach is good enough.

The server startup and reconfiguration are the two times when there is a potential conflict between the DHCP server process loading leases from files and ''kea-lfc'' writing to these files or otherwise modifying it. In those cases, the server process is responsible for avoiding the conflicts, as described above. In all other cases, the server leaves it up to ''kea-lfc'' to check for other running instances and exit if required. This assures that the concurrency checks are performed in background and have no impact on processing DHCP messages by the server.

This section lists required updates to Kea to support LFC according to the design described in this document. The estimated times needed for implementation of these tasks is given in parens. The given times include the code review.

There are additional tickets submitted after original design had been created: